Hello, this is my first own & proper translation of a LN from zero.
I’ve done some TL work for some mangas and WNs here and there too.
Don’t expect any quick daily machine translated shit from me.
Also since this is a personal project it might not be as polished as other translations with proofreaders and editors working on it. But at least it won’t be some Chinglish or barely readable machine translated gibberish trying to pass as a translation.

I’ll be translating from the LN source instead of the WN, although the early few chapters I’ve looked at are almost identical.
The Prologue in the WN and LN are practically the same, except for the character data sheet is an illustrated page in the LN whereas the WN is in text format with some extra data which I’ll try to retain. Also there are minor changes to a few lines here and there, but nothing critical.

Volume 1, Prologue – When I thought of job hunting I ended up in a Parallel World

This world, it was done so nicely after so much effort, for it to be destroyed it’s such a waste.
Should I raise a Hero again? But searching for a Hero or someone with the aptitude is pretty troublesome!
That’s right, this time should I try giving away the ability to someone “acceptable”?
What kind of ability should be good? Oh the setting of this game is kinda good! Like this? This is somewhat “fitting”!
Yeah, let’s make him take a test.
Sending a job offer to Hello Work… [TL Note: Hello Work (ハローワーク harōwāku?) is the Japanese English name for the Japanese government’s Employment Service Center, which manages unemployment insurance benefits for both Japanese and foreign unemployed workers, and which also provides job-matching programs to the unemployed. https://en.wikipedia.org/wiki/Hello_Work ]

If it’s no good I’ll think it over. In the worst case, if it’s destroyed, it can be remade again…

My name is Yamano Masaru, 23 years old. I’m currently a NEET.
I’m looking at the job offer ticket in Hello Work right now.
I have been idling at home, but carelessly let the money run dry and looking for employment.
I’m not particularly desperate in finding one.
Even though I’m searching, if I don’t find one, my parents won’t raise a fuss about it.

Going to Hello Work, I found this job offer there.

“A swords and sorcery fantasy, test play for Miniature Garden of Razgrad World.
Extended period of time, preferred to be able to live on site.
Monthly salary of 250,000 + percentage pay.”

On the spot I decided to be interviewed right away, it was within walking distance so I headed there.
I was in casual clothes and with no resume. Was told it’s alright and wanted me to come immediately.

Suspecting it should be around this area, I was optimistically preparing myself seeming to have found a nice job.
Once I get my wages, first I want this and that…
And so, while deluding myself I arrived at the venue for the interview, a dandy-like mister in a suit came out to meet me.

“You’re the one who contacted us, Yamano Masaru, right? Welcome. I’m the one in charge, my name is Itou.”

“Yes, I’m Yamano. I’m sorry for my appearance. Please treat me well. And it was about the Test Play, but what kind of job I’ll be doing?”
“Have you played RPGs?”
“Yes, it’s something I really like.”
“Then the explanation will be quick. This time it’s a new skill system being introduced, so we’d want you to test it.”

While talking we walked, we passed through a place like a reception room.

“In Razgrad World there are adventurers who defeat things like monsters, it’s a pretty common swords and sorcery fantasy world, ah, please fill in all the required entries.”

A sheet of paper for the name, address and something like a survey, the other one is it a contract?
I borrow a pen and fill them in order.

“The test is scheduled to be long term…”
“Yes, I’m currently free so there’s no problem at all.”
“Then, that’s good. If you have filled it, shall we let you personally experience Razgrad World right now?”
“Eh, Suddenly starting today?”
“Yes, as soon as possible. Ah, you finished filling it? Yes yes, all required information has been filled, right? Then shall we transfer to the location?”

And so, I was dropped into Razgrad World.

It is grassland all around.
Until now I’m sure I was in a reception room.

“Well then, let’s carry out the tutorial.”

Itou-san’s voice came from somewhere. I can’t see him.

“W-wait a second. Where is this place?!”
“Where, you say? This is Razgrad World! First of all, could you open the Menu?”

It has a polite tone, but the manner of speaking has a degree of majesty to it.
Thinking [Menu] a screen appeared in front of my eyes.
Name, Level, Occupation, Skill, Item fields are arranged in an orthodox way.
Even occupation was thoroughly displayed as NEET.

“Please choose [Item]. here’s a Short Sword, isn’t it? Please try to choose and equip it.”

Just as told, I choose the Short Sword and it appears in my hand.

“As a special service you’ll start with the Skills: Fencing Skill Lv 2 and Physical Enhancement Lv 2.”

I see, those two are in the Skills field.

“Well then, please proceed straight forward. A wild rabbit will appear, try to defeat it.”

As told, I advanced and a huge sized rabbit appeared. And it came attacking!

“Ah, keep calm keep calm. Because it’s a weak animal it can be beaten in a single hit!”

Matching the rabbit’s charge I waved the sword, its blood sprayed out and it fell down.

“Please extend your hand towards the rabbit and think about harvesting.”

“Look at the Item field, please. Rabbit meat and fur have been added, right?. Then, for your first quest. Defeat five wild rabbits. You just defeated one, so four more to go.”

Is that so? This is a game, isn’t it? The rabbit was awfully realistic, the sensation of stepping on the ground and the wind, one wouldn’t think that it was anything but the real thing. By staying indoors does it mean they finally created a VRMMO?

(No, this is real) Itou-san’s voice resounded directly inside my head.
Waiiitttttt、why are you reading my mind! Moreover telepathy?

“Listen well, this isn’t the Earth. It’s a Parallel World. You’re dead if you die. Only I know the way back. The test play period is 20 years. If you survive those 20 years and clear the special events you’ll be able to return to Japan. Incidentally, I’m the administrator of this world, think of me as something like a God.”

……….(silence)
From the conversation with Itoushin, previously Itou-san, I understood the following:

● Since I made a contract I have to finish it. There’s no right for refusal.
● If I satisfy all the requirements for clearing, I’ll be returned to my former world, at former time and former age.
● My salary will be paid for the time I lived here. The bonus will only come from the services I do here.
● If this world is left in its current state it’ll be destroyed within 20 years, so it’s recommended I don’t shut myself indoors in a town. [TL Note: as in, not being a Hikikomori]
● In the end, since it’s a test of Skills, it doesn’t matter if I live freely without thinking about saving the world.

All my objections were rejected. I signed a written contract after all, didn’t I? That one point stands. Itogami only has a voice and doesn’t have a body, if that is really what they call a God, it cannot be helped. I’ll have to do exactly as I was told?

“Dammit! If it comes down to this, bring it on! I’ll somehow survive this 20 years!!!”
“Actually, you’re pretty excited, don’t you? That job offer was done so only those with aptitude would catch it. I might say, you’ll get interested in the life here once you get used to it. So, let’s continue with the Tutorial. Only 4 more wild rabbits.”

It took around an hour to defeat 4 wild rabbits and I leveled up. It seems there’s a small sound to let you know of the level up. It really feels like a game… 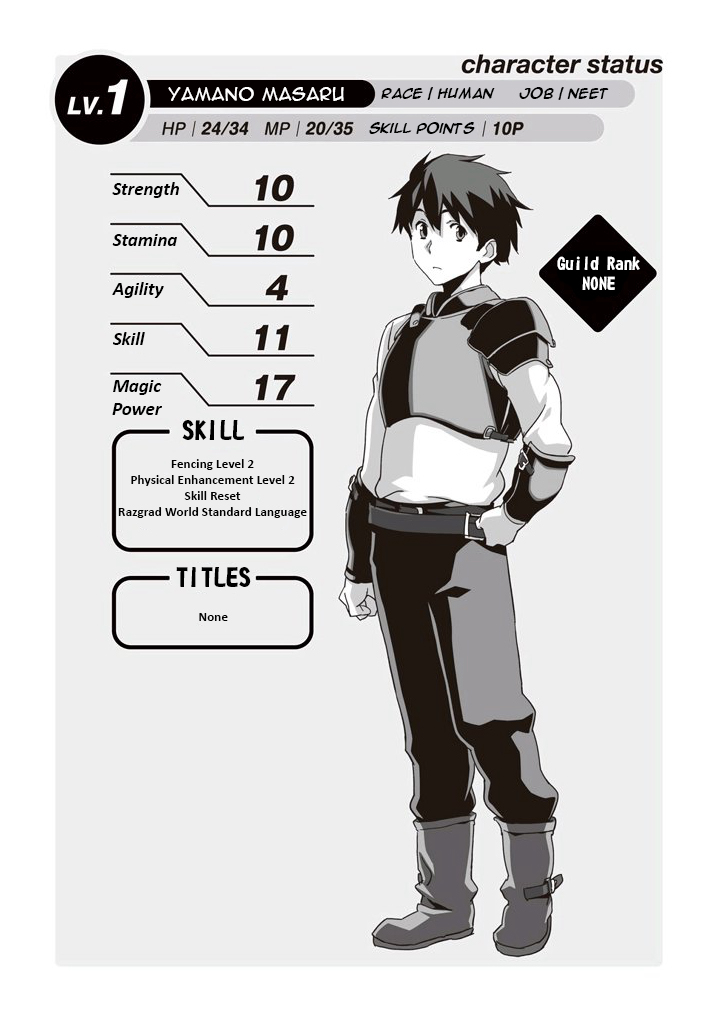 “Congratulations. Now that you have cleared the quest you got a gift of initial equipment and 2000 gold. Well then let’s finish the Tutorial. Please select Skills.”

Selecting Skills in the Menu opens a separate window, an extensive Skills list is displayed.

“Freely assign the skill points to gain the Skills you like. Also, if the Skills style is unsatisfactory for that purpose Skill Reset was prepared, so you can redo it as many times as needed.”

【Skill Reset】
Once every month Skills can be reset and points returned.

“It’s necessary to test many kinds of Skills after all, right?!
So, shall we choose something? I’d recommend some Life Magic.” [TL note: Life as in daily life or livelihood]

“There’s no toilet paper here. Because the technological level is in the middle ages.”

【Cleanup Magic】
To clean off the dirt from the body and things.

For use in the toilet?…

Somehow, it appears you cast magic just by thinking it. So nice it’s easy! The blood stains on the sword disappeared in the blink of an eye.

“And that’s the end of the Tutorial. The town is just ahead, it would be excellent if you head to the town and enter the Adventurer’s Guild first. Well then, I wish you good luck!”

And leaving those words, I knew that Itougami’s presence disappeared.

“When I thought of job hunting I ended up in another world. I don’t even know what to say…”