Pretty short but funny chapter, so here you go.

Volume 1, Chapter 4 – The man who fought desperately with a wild rabbit

When I woke up, it was an unfamiliar ceiling. Ugh, it has become routine. I had to say it.

The girl with the magic eye mercilessly gave her verdict.

“You know, I have a bit of a receding hairline but I’m not bald! Do you understand?”

I was threatened with his pointing finger, so I nodded while shaking.

“He is at a sensitive age. It’s better if you don’t touch the subject of his head.”

No, Tilika-chan, you shouldn’t be saying that.

“And so, what happened? They said you were found unconscious near the town and were carried in.”

Seems a kind person found me unconscious and was carried to the Adventurer’s Guild.

“A demon beast came attacking, at the end of the mortal combat we simultaneously struck each other.”

“Demon beast, this one?”

“It was dropped near you, so it was brought along.”

“At first the rhythm was good, but while fighting my stamina was exhausted, even then they kept attacking. I desperately fought, but close to where I could see the town I used up all my Magic Power too…”

“And in the end you came to a draw with the wild rabbit? What kinda demon beasts were you fighting?”

I can’t answer that. Do you think I could say that I was almost killed fighting wild rabbits?

“Show me your Guild Card.”

Suddenly my Guild Card was snatched away.

“The Guild Card records the beasts and monsters subjugated. Didn’t they explain you that?”

I feel like I have certainly heard that. With subjugation requests, as long you get a kill it’ll be recorded on the Card, so it’s a convenient function since you don’t need to bring back the corpses.

“One, two… 21 wild rabbits? This many in a single day is incredible, but are you kidding me? You almost got killed by wild rabbits?!”

“They were terrifying enemies…”

It was really scary, I thought I was gonna die.

“Ah, it’s been a while since something made me laugh like that. Gahahahahaha. Ahh, you should properly thank the one who brought you back. And you must come to the Beginner’s training in three days. Objections denied.”

I could only nod silently. That day I returned to the inn and fell asleep crying sorrowfully. The next day, going to the guild I became throughly famous as the man who fought desperately with a wild rabbit and ended in a double KO. I gave my report of the request and immediately returned to the inn to bury myself under the bedsheets sulking. By the way, it seems the one who spread the gossip was the one who carried me. Seems Drevin and Tilika-chan kept that a secret. To my damn life savior… thanks, but I’ll never forgive you.

￣￣￣￣￣￣￣￣￣￣￣￣
Days later, I went to thank the person that carried me.

“No, you see, if a monster strong enough to defeat an adventurer had come out, it must be reported, right? That’s why I was just shown your Guild Card. Look, I had to explain the circumstances of your collapse, etc. so I had to tell everything, right? That seemed to have spread. Honestly, I’m sorry.”

The cause of me fainting was Fencing Level 4. Despite having below average Stamina, moving like a top class swordsman exhausted my Stamina in the blink of an eye. It seems the potions didn’t work because I drank them in short succession. Looks like I have to leave at least a 30 minutes interval.

I diligently wrote the log and got a reply.

“It was unexpectedly amusing, so I’ll give you a bonus. Itou.”

The Bonus was a Magic Item called [Ring of Magic Power]. 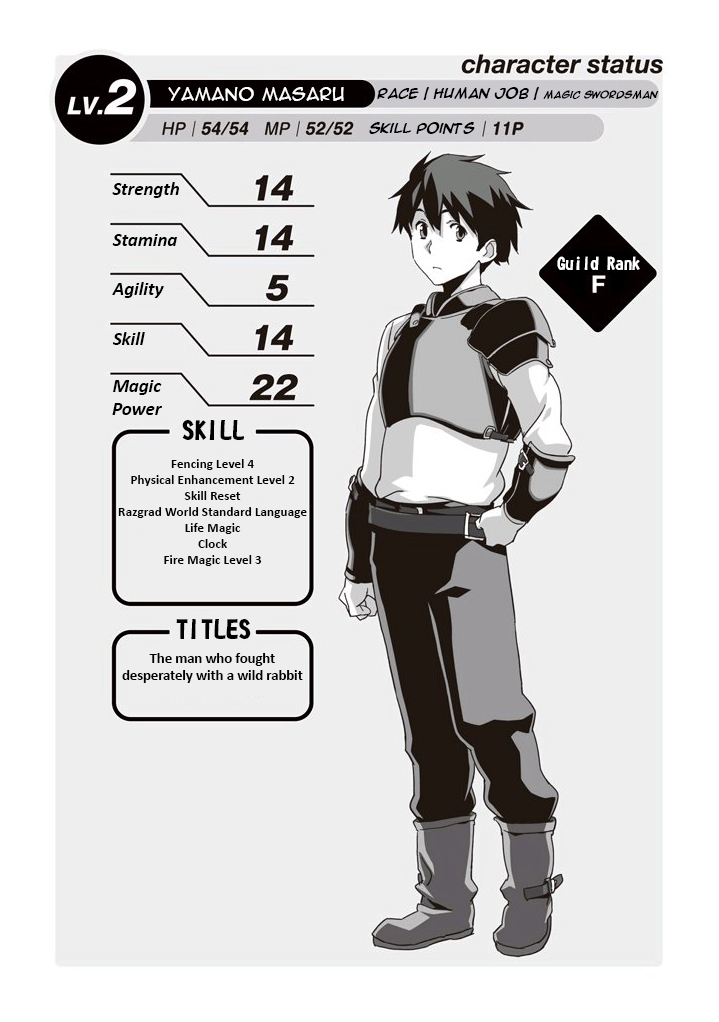 【Titles】 The man who fought desperately with a wild rabbit